You are here: Home › About Teaching › Are you teaching/learning the hard way? 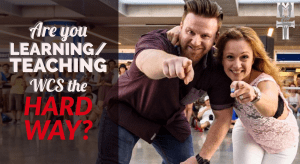 Do you know how to do the Electric Slide? The Wobble? The Tush Push? If I asked you to show me Waltz box step, could you? Can you join in on the Horah? Do you remember how the Shim Sham goes? How about that Go, Johnny, Go square dance?

These are “dances”. They are sets of choreographed moves that are done to a particular piece of music or type of music. They are memorized, like Christmas carols, nursery rhymes, and karaoke songs. You know what to do and when, you can keep up, and you can play your role. There is no improvisation, no conversation, and technique is irrelevant. However, there is a significant difference between memorizing “a dance” and learning “how to dance”.

Are you sure you learned “how to dance”?

You could be an accomplished dancer and have no idea how to dance the Tush Push. Similarly, just because someone knows how to do the Tush Push, doesn’t mean they do it skillfully. And it doesn’t necessarily mean they can translate any skills from Tush Push into other styles or practical dancing situations. Dancing is a skill, a sport, a language. Just because you memorize “a dance”, doesn’t mean that you “can dance”. When you learn “how to dance”, you are learning physical literacy in a particular dance language.

As a child, I had to memorize “Silent Night” in German, but that doesn’t mean I can understand or converse in German.   Someone could teach you how to do something in “West Coast Swing language”, and over time you might memorize enough to get by. However when placed in a room full of fluent speakers, as with any language, it would be clear that you’re missing something. This might seem obvious on the surface, but the collapse of these two distinctions is hindering how our dance is taught worldwide. 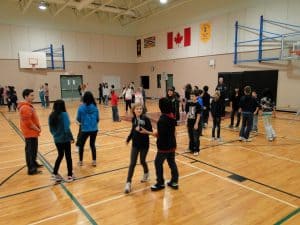 (not the school mentioned)

Recently, I observed the effect of this collapse. I was teaching (as a substitute teacher) in a middle school where provincial funding cuts had forced the district to eliminate Physical Education specialist teachers, (this point will become important later).  My instructions were to bring my class of Grade 6/7s (11-12 year olds) to the gym to participate with 3 other classes en masse in their 2-week “dance unit”, and I was to simply assist and supervise.

For this dance unit, the (respected, educated) classroom teachers had decided to show (I use this word because the word “teach” seems too generous) a variety of “dances”. They had already done some line dances, which involved all 120 kids lined up across the gym vaguely, half-heartedly executing their self-conscious/unskilled/apathetic interpretation of the choreographies. Those that didn’t get it the first day just faked it until they came to a part they knew. They were not enthusiastic – just going through the motions. It all went downhill from here.

The rest of the class was an eye-gouging debacle. The teachers decided it was time to introduce them to square dancing. I witnessed exemplary classroom teachers I admire crash and burn attempting to “teach dance”. These model educators made every single pedagogical and class management error we are trained NOT to do – they had no idea how to convert their teaching methods to the PE/Dance environment. For example, try telling a group of 12 year olds to (on their own) “go find a partner of the opposite sex and hold hands”. Ha! Good luck!

There were more face-palm errors, but the ultimate goal of the (sophisticated enough) dance curriculum was already doomed. The ever-so-critical first impression that these kids got of square dancing was that it was confusing, embarrassing, irrelevant, and frustrating. It is a slippery slope: this impression is likely to colour their judgement all partner dancing if not dancing in general. The kids’ weren’t to blame, and neither was the curriculum. It wasn’t even the teachers that were the problem – it was their methods.

In case you haven’t made the connection yet…

These are the same chronic problems that exist in teaching dance outside of school. (albeit maybe not all at once!)

We meet students all over the world who can confidently show us their solo foot work for a whip but are incapable of dancing it effectively with various partners because they are missing most of the fundamental skills required for function and comfort. These are not just newbies – they mig

ht have been social dancing and competing for years! Yes, learners progress at different rates, but there exists a method that consistently produces much faster results.

It is a myth that WCS is a hard dance to learn. What might make it difficult is if it is taught in a difficult way: some traditional methods bog students down with non-essential technique too early, and some prioritize foot figures and patterns over skill development. Students all over the world are struggling to force their bodies to copy their models on YouTube. But this is a perceived shortcut that is artificial learning – like a baby skipping over the crawling stage, there are developmental consequences later on.

I want to be clear that I’m not saying that patterns are bad, or that choreography is not useful. Just that there is a whole layer of essential skill development that enables students to access those patterns and choreo, and this layer has always been neglected in WCS. If students had developed fundamental movement skills before patterns and foot figures, the patterns and choreo would be So. Much. Easier.

“What’s wrong with traditional methods if dancers learn something and have fun doing it? They’ll improve organically.” I know it seems easier to teach the way you learned, but this has clear drawbacks in terms of introducing people to the dance. Consider this if you want to do the dance, which you love so much, justice. I’m not saying students won’t learn via traditional methods: they’ll just learn slower, and the hard way.  They’ll spend more money, but they might quit before they ever get to their first convention, or to their next series, or to a level of comfort/joy/addiction. I learned via traditional methods from some great teachers, but I had the advantage of applying my coaching and teacher training to accelerate the process. I’ve lost count of students who, after working with us, exclaim passionately, “I wish I had learned this way from the beginning!” 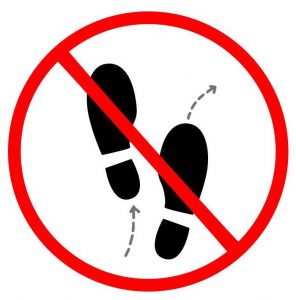 I’m going to say it: WCS classes that prioritize patterns and foot figures over skill development are failing their students, leading to delayed learning, confusion, frustration, and attrition. It is unrealistic and reckless to expect students to “pick up the idea” as they go, and naive to believe that only advanced dancers would care about or could handle technical learning. Teachers need to take more responsibility in the scope and sequence of their instruction. It’s not just the content (step/patterns/figures) that makes the difference: it’s the method used to teach it, and traditional methods are limited. This was our inspiration for creating the Swing Literacy Development Method.

“So if we shouldn’t use scripted patterns and foot figures to teach beginners WCS, what should we teach instead?” 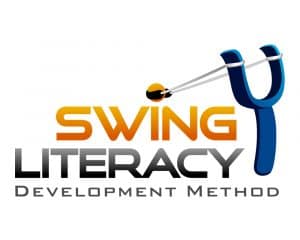 Ah, the million dollar question. To understand this, you first need to empathize with the learner and train and adopt a skill progression approach. Orienting them from a high level before going into details, identifying non-negotiable mechanics vs. optional variables, introducing and expecting diluted skills in the beginning that will become refined later via chaining and shaping, foreign concepts taught with relatable analogies and entertaining isolated drills for skill progression, all in a magic sequence that makes all the difference. And yes, once you train in this Swing Literacy Development Method, the final product you deliver to the student is elegant, unintimidating, and consistent.

These essential teaching strategies are just a few that are expanded in full in the comprehensive SLDM Teacher Development Program. Maybe it’s time to check it out? 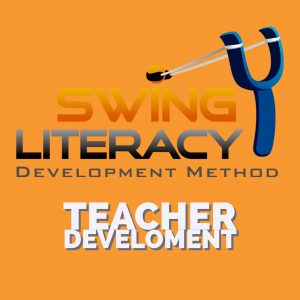 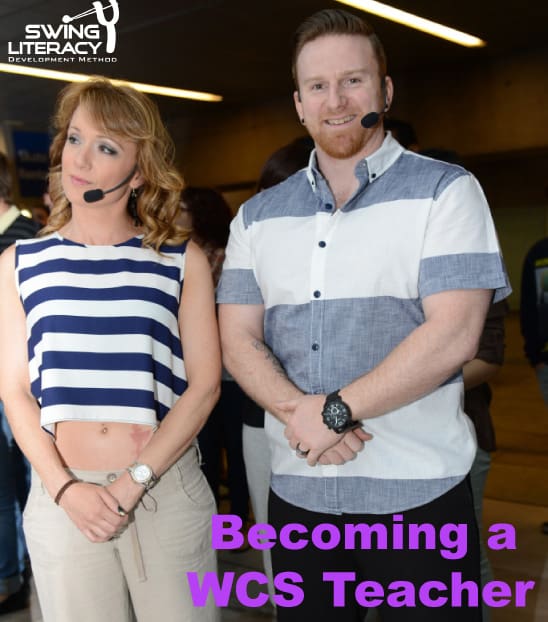 2 Responses to “Are you teaching/learning the hard way?”

Search Coach’s Corner for a topic: