You are here: Home › About West Coast Swing › History

It started with Lindy Hop

Swing dancing started in the U.S. with a dance called the Lindy Hop. This dance originated from the Charleston and was perfected by the black dancers in Harlem, New York, in the late 1920s. The dance grew as a response to the swing music of jazz musicians like Louis Armstrong, Fletcher Henderson, Duke Ellington, and later, Count Basie. During the 1930s and 1940s, various versions of Lindy or “swing dance” came into existence: Shag, Push, Steppin’, Balboa, Hand Dancing, West Coast Swing and Jitterbug. Jitterbugging was also termed “jiving”, and jitterbug music, “jive”. After WWII, movies showing Swing dancing started labelling it “Jitterbug” or “Rock & Roll”. Soldiers took various forms of Swing all over the world, but those dances got mislabelled too. Both Lindy and Jitterbug are known for their aerials, swing-outs and lifts, while Jive became the stricter, tamer and more standardised alternative for most dancers. West Coast Swing evolved as a smoother, bluesier, sexier version of Lindy Hop, that adopts the music and movement trends of each decade. 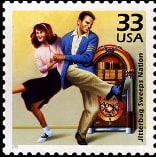 The birth of West Coast Swing

As in the History of most things, there is not one definitive story of the development of WCS – there are a few. It is likely that they are all true, but there is much debate about which source had the most influence.

A dancer named Dean Collins had a unique style of Lindy Hop that was smoother and more upright. He moved to Hollywood and worked on film where they appreciated the linear movement for the camera’s sake. Arthur Murray, American Ballroom franchise king, sent an assistant to observe and record the dances that were so popular in the dance halls. When Laure Haile reported back to him, they created a Ballroom version of Dean Collins’ style, naming it “Western Swing”. By the late 1940’s, Lindy Hop was banned from virtually every serious dance hall due to too many injuries to self and others from kicks, jumps, etc., so the national Ballroom associations, looking for a much more simple and milder form of Hollywood style, invented East Coast Swing and added it to their syllabus.

Western Swing did not look like the reckless abandon of the previous swingers and looked much more smooth, polished and stylish, and it was danced to slower more Blues-style music. Many other ballroom teachers would dance Western Swing to entice students to take lessons, but when the potential student would ask what it was and where they could learn it, they would be told it was East Coast Swing or Jitterbug so as to qualify for their national accreditation. Students would think they were learning what their instructors were doing, but except for the advanced dancers who took private lessons, they were all just learning East Coast Swing. This dance still exists on its own, but in the competitive Ballroom world it has been developed and fine tuned to what is now called “Jive”.

From the mid 1940’s to today, the Lindy Hop, Jitterbug, and Swing were stripped down and distilled by the ballroom dance studio teachers in order to adapt what they were teaching to the less nimble-footed general public who paid for dance lessons. As a result, all the ballroom dance studios bred and developed a ballroom East Coast Swing and divergent ballroom-style Western Swing.

On the street, however, West Coast Swing continued to evolve. After the late 1940’s, the soldiers and sailors returned from overseas and continued to dance in and around their military bases. The story goes that the prostitutes in the dance halls and night clubs on the shores of the Pacific Ocean in Long Beach and San Diego California would get kick-backs of liquor sales which the sailors would purchase. The sailors would get drunk on their leave, and these “Ladies” would dance with them. The more they drank, the less able they were to dance, so the “Ladies” would just hold on and sexy wiggle and do sexy footwork at the end of the slot till he was ready to spend the remainder of his money behind closed doors. This sensuality would prove to be a permanent addition to the style of West Coast Swing.

In 1959, some of the California dance organizations, with Skippy Blair setting the pace, changed the name of Western Swing to West Coast Swing so it would not be confused with Country and Western dancing.

American Bandstand introduced a dance called the “Slop” which was just another term for West Coast Swing. Historically, the dance masters of America were trying to control what people danced and tried every year to create, develop and introduce new dances to the money-spending public. When the music would change they would just change the name of some of the dances and re-introduce them to the public. Swing as a dance was the main dance that would be changed or another variation of the same dance was introduced. Many performers tried (and still try) to take credit for a new style by giving it a new name.

Evolving with the music

The Twist changed everything

During the 1960’s Television put dancing on the back burner. Most people did not have to leave their homes for an evening’s entertainment as in the past. Televisions were now affordable and almost in everyone’s home. Since these couples dancers were not going out and dancing and leading the way, newer dancers generally did not know what or how to do the dances of the past. In walks a dance called the “Twist” and no one had to learn anything, just “twist the night away”. Other freeform style dances would follow and a whole generation grew up without partner dancing.

However, there was still a small group that did dance and kept it alive, these dancers formed Swing dance clubs and would continue it on. Then Country Western music and dancing gained popularity. For a time many Country Western establishments outlawed West Coast Swing being done in the clubs (only a few dancers were doing it at the time) … as being too sexy and having too much attitude along with stating it NOT being Country. However after awhile everyone wanted to do it except for the die hard Country Western dancers.

In the 1970’s, Disco became the rage and Swing Dancers were now dancing to Disco music. Most Disco dances have strong roots in Swing, Samba, Cha Cha, Mambo, Merengue, Fox Trot and Tango. It went through many variations in the seventies, with line dances for groups of people, solo movements that came and went, and partnership dances, particularly the Hustle. These new young dancers did not know of the earlier dances, and they were looking for something “not ballroom” and “not swing” to do to the synchopated beats.

Believed to have originated in New York in 1970, also known as “Disco-Swing”, the Hustle is a mix of Latin and EC Swing done to the new “heavy” beats of disco music. John Travolta and “Saturday Night Fever” made dancing the “in” thing for many people, especially men. Hustle is danced to the contemporary pop dance music of the last 20 years. It is a fast, smooth dance, with fun turns and patterns and the ability to change direction quickly. It was easy to do and perfect for the clubs.

Many of the top hustle dancers also dabbled in Ballroom and Swing and soon found many of their hustle checks and moves could be danced in swing as well. This was the catalyst for modern WCS. Those young dancers made more young people want to check it out as it wasn’t what their parents were doing.

With disco music dying and New Wave becoming the next big thing in pop music, “Ballroom-WCS-with-a-Hustle-influence” became the dance of choice for many in the 80’s. Many competitions were being held across the US as now WCS was unique enough to be done outside of ballroom and Lindy Hop events. With the popularity of the 80’s bands and Swing dancers using their music, more and more young dancers were coming into WCS from other genres: Jazz, Ballet, and even the budding Hip Hop scene.

Hip Hop and Breakdance were other dance styles that originated on the streets of New York in the 1970’s. It originally was done upright, using precise, improvised staccato movements such as popping and jerking to mimic the rhythms and lyrics or rap in the music. It was influenced by Tap dancing, Lindy Hop, James Brown’ “Good Foot”, Salsa, Martial Arts, and Afro-Cuban and African-American dances. In fact, many Swing patterns and footwork can be identified in today’s Hip Hop performers. The Breakdance move “Charlie Rock” is a direct descendant of the Charleston. On the West coast a cultural dance movement called “Funk” was emerging, which bred “locking”, a more fluid version of popping. This scene was nourished by soul, R&B and funk music at outdoor functions and discotheques.

West Coast Swing, being a dance that evolves with the popular music of the day, did not immediately embrace the Hip Hop style. It was not until the late 1990’s and the growing prevalence of Hip Hop and R & B artists on the radio that WCS dancers started to adopt this new music and accompanying movements.

West Coast Swing is still evolving. Today, it is not similar to its ancestor, Savoy Style Lindy at all. It does not have a certain dress style, usually just trendy-casual dress of the day. It is not music dependent, meaning that it can be danced to almost any type of music available, as long as it’s in 4/4 time. Blues music, the original music used for West Coast Swing, has been the common denominator. No matter what decade you were in, you could dance WCS to Blues music. However many dancers also like dancing to the more up-tempo rhythms of Funk, Disco, Jazz, Soul, Motown, Beach, Techno, Rap, Pop, as well as Country, Big Band Swing, Retro, and even some Latin. The dance itself originated from Swing music, but now Swing is only a fraction of the music used. The movements are slower, more organic, and less contrived. As time passes, the ballroom influence is disappearing in favour of contemporary jazz and hip hop movement, bringing the dance back to its urban trajectory.